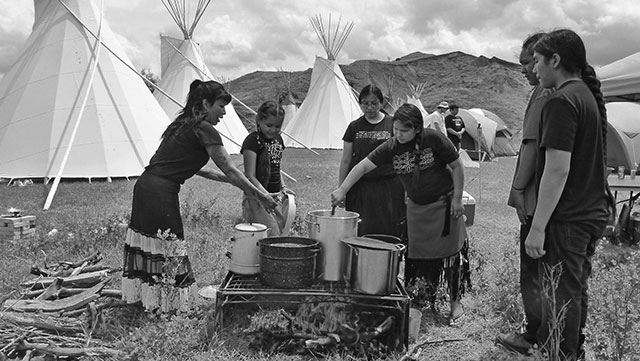 Children living in Cheyenne River, South Dakota, the 4th largest Indian reservation in the U.S. are challenged by having…

It feels like wartime,” says Diane Garreau, a child-welfare official on the Cheyenne River Sioux Reservation, in South Dakota, speaking of the youth-suicide epidemic sweeping Indian country. “I’ll see one of our youngsters one day, then find out a couple of days later she’s gone. Our children are self-destructing.”
Read Story »

Indian Reservation Reeling in Wave of Youth Suicides and Attempts

Tribal leaders at Rosebud took a survey of Todd County students in March. The students’ biggest complaint was that they did not feel safe for fear of gangs. They said that they had no refuge, that their parents were not present, and that they saw too much tragedy, alcoholism and hopelessness.
Read Story »

As Native-American languages become nearly extinct and many young Native-Americans don’t have a sense of their own history, the poverty and substance abuse issues multiply, Garreau said.
Read Story »

“We found out that when the state of South Dakota seizes a Lakota child they were forced to take a mental health screening test. The screening test was drafted up by the Eli Lily Corporation which is a major manufacturer of psychotropic drugs. When they flunked the test, they were determined to be in need of one or more of these drugs”.
Read Story »